Last week HipByte released RubyMotion and although I was originally skeptical, I’m now fully on board. I wouldn’t consider myself an Objective-C developer over, lets say, a Ruby developer or C# developer. I’m simply a developer that likes to learn. When a client brought in an idea that needed an iOS app, I wrote it in Objective-C with Xcode like a good boy. The size of the app made it perfect to rewrite in RubyMotion which gave me a chance to compare and contrast.

Bridging between Ruby and Objective-C methods is nearly seamless. We can call [NSString +stringByDeletingPathExtension] on a string we’ve created with the normal ruby syntax.

can be simply rewritten as

3. What is that parameter for?

Named parameters. I don’t know why all languages don’t include these. They are tremendously helpful for readability.

You can add project dependancies quickly. Just add the frameworks name to the dependency array in the projects rakefile.

Deploying your app with TestFlight to beta testers is streamlined with the addition of the motion-testflight gem. Instructions on setting it up can be found at the RubyMotion page by following this link

Once you have it setup, its super easy to deploy to TestFlight

We’ve already got plans to expand our use of RubyMotion in the near future. Being primarily a Ruby shop, RubyMotion means the ability to pair even if one isn’t comfortable with Objective-C and thats the biggest win of all. 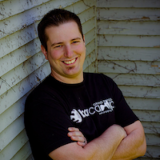